The Lone Star Girl got hives all over her upper arm this evening after getting her ant bite shot.  It was her first reaction to a shot and when we went, fairly unconcerned as she gets plenty of hives,  to show the nurse, they sort of went "whoosh!" into the exam room with us and the nurse practitioner was saying stuff about how they might be able to avoid the epinephrine and I said she really has never needed it for something that started as hives and she very politely told me to sit down and shut up, but not in those words.  They gave her an antihistamine and watched it for awhile, which is exactly what I do when she gets hives.  I asked for clarification as to whether I should worry more about hives in the future since they were so scary-serious, but they said giving the antihistamine and watching was the right thing to do when it's localized and there are no other symptoms.  So after awhile they let us leave and everyone seems fine.

Today, we talked about the background and general philosophies of the Anabaptist movement with the LSG's class.  We started looking more specifically at the Mennonites and will continue reading about the Mennonites, Amish and Brethren at our next meeting.

The LSB's lesson was the parable of the Good Shepherd.  She then chose the shepherd work, along with the world communion table and spent some time with that, later drawing it before it was time to return to Meeting.
1 comment:
Email ThisBlogThis!Share to TwitterShare to FacebookShare to Pinterest
Labels: First Day School, Quaker Children

Arizona's governor has signed SB 1070 into law, allowing law enforcement to require that people show ID anytime they have any reasonable suspicion that the person in question might be in the country illegally.  They can lock up people who aren't carrying "their papers".  Gee - I wonder what constitutes reasonable suspicion?  Being Hispanic, perhaps?  Or speaking Spanish?  So much with the treaties we signed with Mexico when annexing that land after the War of American Imperialism, I guess.
3 comments:
Email ThisBlogThis!Share to TwitterShare to FacebookShare to Pinterest
Labels: Arizona, racist pigs, SB 1070

I hope you are having a lovely Earth Day!

We celebrated the coming  Earth Day this past Saturday by attending the annual Earth Day - Bay Day Festival.  Lone Star Pa and the Lone Star Girl took a shift at the Clean Economy Coalition table passing out literature about Las Brisas while I kept the Lone Star Baby occupied at all the fun activities. As usual, the Lone Star Girl rocked everyone's socks off teaching people about the dangers of petroleum coke - she is amazing.

Today, the Lone Star Baby's school celebrated their annual Arbor Day event and Lone Star Pa took the day off to join them while they planted.  We contributed marigolds, daisies and ladybugs (which I dropped off yesterday when I dropped the LSB off for school) and the LSB was so happy to have her Daddy there.


This evening, we had a nice dinner together and the LSB and I planted a small sandia plant and a little okra plant in our growing garden of patio and near-patio containers.
Besides our activism, I have been working on making one small change since March to become greener in our family lives and I will blog about it soon - it is very small, but it has real meaning to me.
Happy Earth Day! 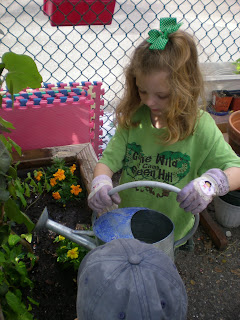 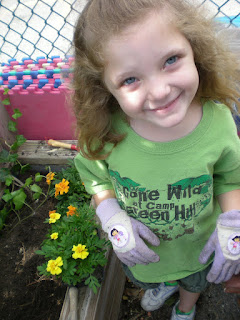 I  took a moment out of my busy evening to eat a sandwich on my porch while reading a mother-daughter travel memoir and I saw the most vibrant red bird land up in our ash tree.  It wasn't a cardinal - no crest - I had never seen such a bird before.  I called through the glass door to the LSG who was doing homework inside and she came out to look for a moment and then went back inside.  I watched the bird fly across the yard to another tree and then I got up and followed it around the house to find myself standing in our side yard full of wild mimosa seedlings looking towards the young pomegranate tree in our backyard, which is covered in flowers the same red as the bird.
Interesting.
2 comments:
Email ThisBlogThis!Share to TwitterShare to FacebookShare to Pinterest
Labels: daughters, mothers, pomegranates 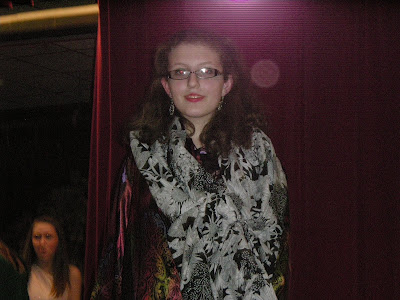 The Lone Star Girl played the crazy Authoress last week in her school's production of The Final Dress Rehearsal.  The parent performance was Wednesday evening (after our exciting in a not-so-fun way day) and they took it to the Middle School One-Act Play Festival the following day and performed it for school on Friday.  It was a great production and the LSG was super!
No comments:
Email ThisBlogThis!Share to TwitterShare to FacebookShare to Pinterest
Labels: drama girl 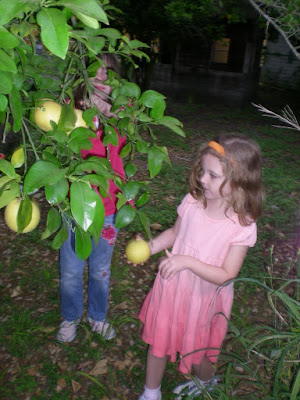 My family went to eat brunch at our favorite diner around mid-day.  I was reading a library book (no!) and not really paying attention to them, so I came rather late into a conversation in which Lone Star Pa was defending to the incredulous Lone Star Girl his mother's view of the U.S. atomic attack on Hiroshima and Nagasaki as "necessary", using the "she came from a different generation so she thought differently" defense.  This is sort of a polite-to-his-mother way of saying that thousands of innocent Japanese children didn't seem like real people to someone of her upbringing, I suppose.  The Lone Star Girl and I were arguing that the Japanese attack on the U.S. was an attack on a military target and in no way excused the murder of all those Japanese civilians.  It was a lively conversation as ours so generally are.


Only later did I see an elderly man sitting at a near-by table looking at me.  He wasn't glaring or trying to express disapproval or anything but he was clearly unsettled in some way.  I wondered if he was shocked that I and my children so obviously saw the use of the atomic bomb as sinful.  I wondered if he fought in WWII.
I don't lionize soldiers.  I don't think they deserve special props for their sacrifices because I don't believe that fighting wars really is "serving our country."  I believe they internalize the self-talk of sacrifice, but I don't think that's an excuse - just because your society says it is okay to kill people and that it makes you a hero doesn't make that true.  (And full disclosure - I have two little brothers in the military - I love them very much but don't think they are choosing a heroic path.)  It's always wrong to kill.

I am less patient with "old people " defenses than I used to be.  Less patient with excusing racism and classism because someone grew up with it, when the same people are willing to write off people who don't rise above much more restrictive conditions than their own programming.
I think everyone deserves compassionate and gentle treatment because we are all deeply flawed.  I don't think that lets any of us off the hook.
1 comment:
Email ThisBlogThis!Share to TwitterShare to FacebookShare to Pinterest
Labels: Peace

We think he still has it but the pain medication makes it hard to tell.  I do not notice him volunteering to go without the pain medication.  Fortunately, he carpools.  Did I mention that his health insurance really sucks?  It does.
3 comments:
Email ThisBlogThis!Share to TwitterShare to FacebookShare to Pinterest
Labels: Lone Star Pa

Tell The Del Mar Board of Regents: No Abatements for Polluters

The Del Mar Board of Regents is set to consider tax abatements for Las Brisas on Tuesday (tomorrow).  Please e-mail them and tell them not to give tax breaks to polluters!
1 comment:
Email ThisBlogThis!Share to TwitterShare to FacebookShare to Pinterest
Labels: Corpus Christi, Del Mar, Las Brisas

Around about Good Friday, Lone Star Pa was climbing around under our house trying to fix a plumbing issue when he noticed something bad.  Real bad.  A couple of our beams (as in - "pier and beam foundation") were rotted almost through and the whole house was sagging down precariously.  Visions of the thousands of dollars we don't have swam through my head.  I had no idea what sort of professional I should even call about this, so I called my next door neighbor, a man who is knowledgeable in all the things in which a householder should be knowledgeable - kind of the opposite of us.  He was out of town but answered his phone and heard my story.  He told me that the professional I was looking for was a foundation company but that he and Lone Star Pa could probably fix it themselves as he fixes stuff like  that on his house and has a house jack.  He told me not to panic and that he would look at it when he got back.

He and Lone Star Pa crawled under the house again on Tuesday and took stock and they fixed it yesterday.  House does not feel like its familiar boat self anymore -  it feels high.  And Lone Star Pa also fixed the plumbing issue today.  And our neighbor told me that our long rotting out bathtub (in our only bathroom - the tub we are hanging onto with caulk and duct tape) was not a structural issue but merely a cosmetic and we-need-a-place-to-bathe issue and could wait without damaging the house and that he and my husband could fix it some summer for no more than a grand in supplies - three to ten times less than it would cost to hire someone to do it.

I made him brownies.  I love my neighbor so much.
In many ways (such as knowledge and finances), my husband and I have zero business being homeowners, but with the kindness and tutelage of good neighbors, I think we are going to be just fine, even as our 61-year-old home gets older and older.
3 comments:
Email ThisBlogThis!Share to TwitterShare to FacebookShare to Pinterest
Labels: good neighbors, home ownership, Lone Star Pa 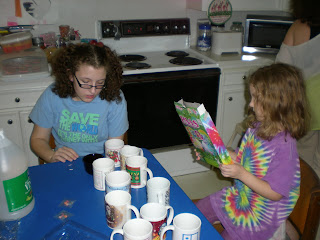 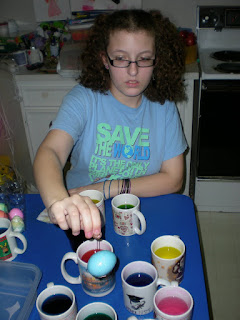 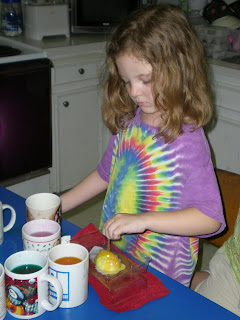 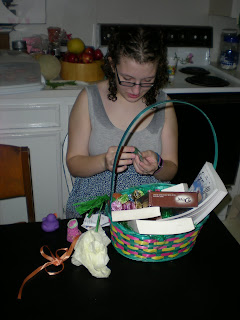 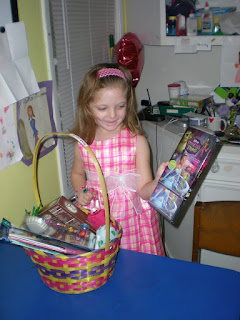 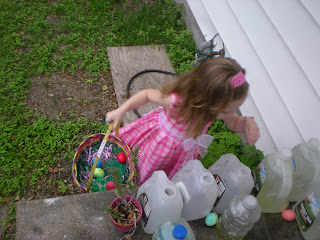 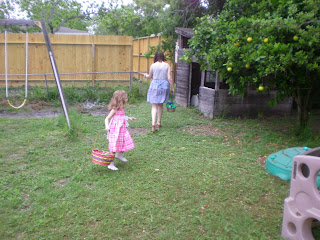 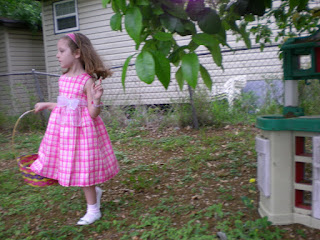 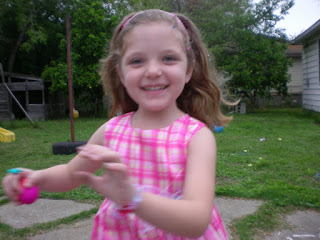 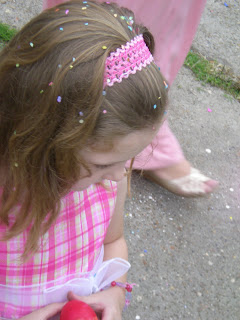 A new study published online in Pediatrics today found that 900 babies and 13 billion dollars would be saved each year if 90% of U.S. women breastfed their babies exclusively for the first six months.  Told you.
No comments:
Email ThisBlogThis!Share to TwitterShare to FacebookShare to Pinterest
Labels: breastfeeding

We had a very nice backyard Easter picnic with the Quakers and some of our fellow environmentalists and Lone Star Pa's visiting aunt and a tub of 1500 ladybugs.  The Lone Star Girl made crepes.  The Lone Star Baby chased bubbles and played with the mariquitas.  The Quakers and our visiting aunt had Meeting in the windy evening.  Lovely.  Happy Easter to you and yours.
No comments:
Email ThisBlogThis!Share to TwitterShare to FacebookShare to Pinterest
Labels: Easter, Ladybugs, Quakers

April is National Poetry Month!  I am full of ideas and frankly pretty annoyed at myself for them.  I've written a lot of poetry lately ... a lot.  I've also come up with ideas of how to organize some of my poetry into four separate collections someday, if I ever , like, send out enough submissions to become the sort of poet whose work would be considered for a book.  It's a little ridiculous.  I was supposed to finish Baby Moon in 2009, then in January, and I still haven't, even though all that is left is the introduction chapter and the resources chapter.  Instead, I'm flitting about writing poetry!  I never can stay focused on one project.
1 comment:
Email ThisBlogThis!Share to TwitterShare to FacebookShare to Pinterest
Labels: poetry, Poetry Month, writing
Newer Posts Older Posts Home
Subscribe to: Posts (Atom)

Lone Star Ma
Lone Star Ma is an employed mama of two Lone Star Daughters. She loves Texas dearly but is sadly underachieving its average of 3 guns for every man, woman and child. She eats mushroom fajitas instead of beef ones and has been known to breastfeed during City Council Meetings. Lone Star Ma has a pathological need to read a LOT and is into peace, equality and the Gulf of Mexico.